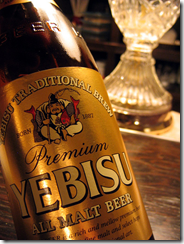 The origins of Yebisu Beer date back to 1887, when Nippon Beer Brewery started producing beer in the area then called Mita Village. The name “Yebisu” was adopted later and is a variation of the name of Ebisu, the surrounding town and the station closest to the Beer Museum. Nippon Breweries, Ltd. changed its name to Sapporo Breweries, Ltd. in 1964.

The Beer Museum Yebisu is dedicated to the history, science and culture of the beloved beverage and the century-old tradition of brewing beer. Beer making made its debut in Japan as early as 1876 when Seibei Nakagawa, who had recently returned from Germany where he studied the art of beer making, was chosen as brewmaster and oversaw the construction of a beer factory in Hokkaido, Japan. In 1887, Japan Beer Brewery Company was established in Tokyo by a group of local entrepreneurs and they invited a brewmaster from Germany to create what became Yebisu Beer. Production of Yebisu Beer ceased for a period of 28 years, but was re-launched in December 1971 and was the first German-type 100% barley beer to be sold in post-war Japan.

If you love beer, you will love this museum! Admission is free and you can sample some of the Sapporo products, including Yebisu Beer, for a fee after visiting the museum.

Beer Museum Yebisu is open from 10AM – 6 PM (Entrance until 5 PM), closed Mondays and during New Year’s festivities (when Monday is a holiday, the next day will be closed) and is located near Ebisu Station.